This is Michelle’s Seizure Story as told by Melissa McDonald

“I still remember the first time Michelle had a seizure,” said Eunice Cole, Michelle Hernandez’s mother, recalling more than 30 years earlier. “I was scared to death. She was just 11-months-old. I remember when she had another seizure…putting her in my lap and driving to the emergency room.”

Cole was told her daughter was having febrile seizures, which are convulsions that can happen during a fever (Febrile means “feverish.”). The seizures usually last under five minutes and are accompanied by a fever above 100 degrees. They affect children three-months-old to six years old, and most children outgrow them.

While they can be frightening, febrile seizures typically don’t require treatment. In Hernandez’s case, her diagnosis would not end there.

Following repeated seizures without a fever and then further testing, Hernandez was diagnosed with epilepsy, a common neurological condition that affects over three million people in the United States (and 60 million worldwide).

For treatment, she began taking daily medications in an attempt to suppress the seizures. However, she would still have breakthrough seizures and, at her worst, 15 to 20 “complex partial” seizures per day. In 70-percent of epilepsy cases, seizures can be controlled with drugs, but if often can be a long process finding the right prescription mix and addressing any side effects.

There are two types of partial seizures: simple and complex. Simple means a person retains awareness; complex is when awareness is lost and the person may make movements such as blinking, chewing or hand gestures.

Then – in 2011, behind the wheel of her car on a highway in Alexandria, Louisiana – 26-year-old Hernandez had a “tonic-clonic” seizure which led to a crash. During a tonic-clonic seizure, a person’s muscles stiffen, and they typically lose posture and consciousness, may bite their cheek, turn blue and experience jerking movements of their limbs.

“I could feel it coming on. I tried to pull to the side of the road, but my foot hit the accelerator instead of the brake,” said Hernandez. “I flipped my car three times. I remember waking up in the trauma unit. They told me they had lost me at the scene and in the ambulance.”

Following that near-fatal wreck, Hernandez’s neurologist in Alexandria referred her to Giridhar Kalamangalam, M.D., a neurologist with UT Physicians and associate professor at McGovern Medical School at UTHealth.

“Michelle had what we call refractory focal epilepsy which are seizures starting in a particular part of the brain that were resistant to high doses of multiple drugs,” explained Dr. Kalamangalam. “When seizures are resistant to drugs, several types of treatment need to be considered including brain surgery.”

In Hernandez’s case, the seizures were due to a rare condition called periventricular nodular heterotopia (PVNH), in which gray matter gets “trapped” deep within the brain of a developing embryo.

“Typically, as in Michelle’s case, there is trapped brain on the right and left sides,” said Dr. Kalamangalam. “PVNH patients can be very difficult to treat with brain surgery due to the deep location of the abnormal gray matter, and the fact that the gray matter is not located in one place, but is present in multiple areas. However, we noticed evidence on brain scans and EEG analysis that only one cluster of abnormal gray matter in Michelle’s brain appeared to be active in causing seizures. Though there was some uncertainty, it was possible that surgically removing that one area along with the surrounding seizure-scarred brain might help her.”

Dr. Kalamangalam consulted with his team that makes up the Texas Comprehensive Epilepsy Program at the Mischer Neuroscience Institute. Nitin Tandon, M.D., director of epilepsy surgery and professor of neurosurgery at McGovern Medical School at UTHealth reviewed Hernandez’s case.

“Patients with PVNH represent a particular challenge as the abnormal tissue responsible for generating seizures is located deep in the brain, often surrounded by important brain pathways,” said Dr. Tandon.

“In Michelle’s case, the PVNH was associated with scarring and damage to the medial temporal lobe structures as well. Seizures in her case resulted from a deranged network involving the PVNH, and the rest of the temporal lobe. Crafting a resection strategy that allowed us to target both the abnormal cluster of cells and the scarring in the hippocampus to disrupt the network was critical in trying to stop her seizures,” explained Dr. Tandon.

In early January 2013, Dr. Tandon operated on Hernandez. She had a seizure immediately after the procedure. The seizure that day would be the last one she has experienced to date.

According to Dr. Tandon, the approach used with Michelle called for minimal impact on normal cognitive processes while rendering her seizure-free.

In October 2016, Hernandez heard the words she had always longed to hear. “Dr. Kalamangalam said ‘you are as close to being cured as possible’.” She said she cried. “Seizures were all I ever knew,” said an emotional Hernandez. “It’s like I have a new life.” 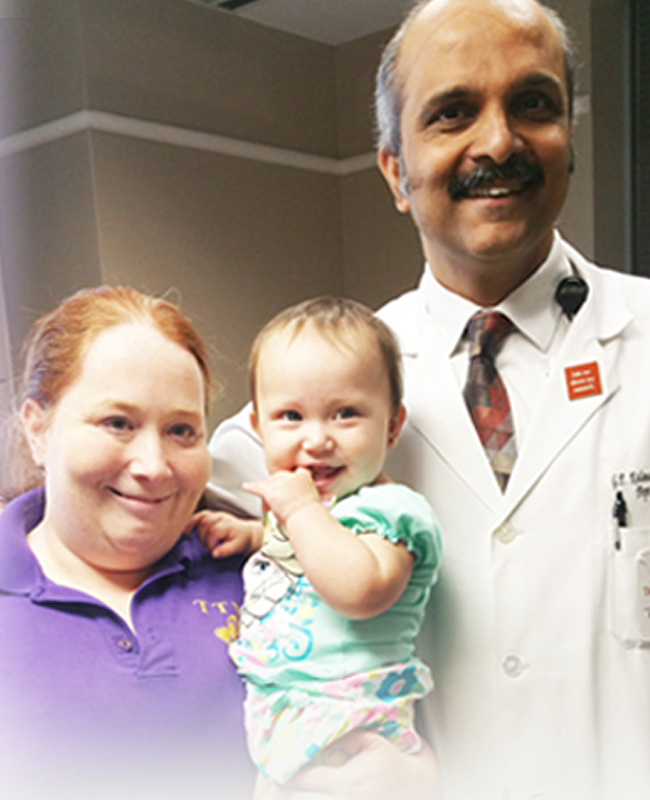 Inspired by the care she received at UT Physicians, the medical practice of McGovern Medical School, Hernandez started her own non-profit to raise awareness about epilepsy. She also believes in educating the public more about what to do when someone has a seizure.

“There are a lot of unknowns in the field of epilepsy,” said Dr. Kalamangalam. “We don’t know why epilepsy arises in the first place. Research is going on at our institution and in epilepsy centers worldwide. There is also an enormous treatment gap in epilepsy. Most patients are not able to access optimum treatment. One of our duties as physicians is to make the public aware that although epilepsy is a difficult disorder to live with, many patients can experience huge benefits from advanced treatments available at specialized centers such as ours.”

“This is one of the most gratifying procedures we do in neurosurgery – one that gives people back their independence and their sense of worth,” said Dr. Tandon. “They are able to go to work, drive, and not be watched over by someone constantly. Stories like Michelle’s motivate us every day.”